Congress government did not provide justice to your tax money 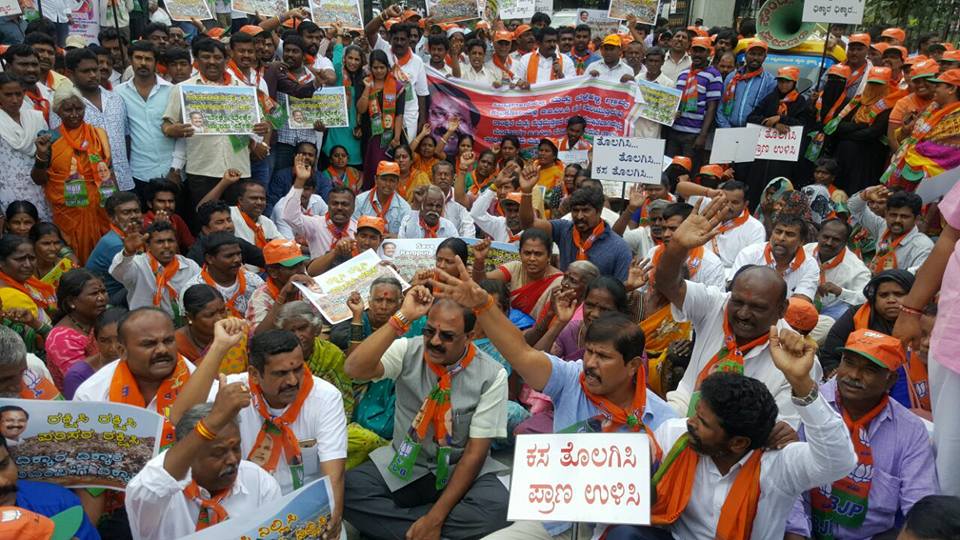 Among other assembly constituencies in BBMP limits Mahadevapura stands first in terms of tax collection. Since 2013-14 till now, Mahadevapura residents have paid Rs 1750 crore, they have paid even more to State government treasury in other forms of other taxes. But in return, government contribution towards development of Mahadevapura is quite low. Many development works are suffering owing to this. On the other hand, more grants were given to the neighbouring MLA Assembly constituencies. We had staged protest against state government against this discrimination in allotting grants.

Two signal free corridors including Bayyappanahalli to NH 208 on Channasandra and Old airport to NH 4 were approved during BJP led State government. Although the present CM inaugurated the project four years back, deliberately work is going on at snail’s pace.

After fierce protest, garbage dumping at Mandur is stopped. Although the present State government had assured to clear the un-cleared garbage at landfill site within a year’s time, measure hasn’t been taken even after four years of assurance.

Inspite of National Green Tribunal directing State government to develop Bellandur and Varthur lakes at the earliest, no action has been taken by the Government so far nor have they utilized the Union government funds.
The Rampura Lake is also getting polluted like Bellandur Lake. But State government has not taken any action to protect it. Despite the pressure to develop a few more lakes in Mahadevapura constituency, state government is paying deaf ears to our plea and is concentrating on the development of only a few lakes.

Primary health centers yet to see the light of the day

Primary health centre at Bidarahalli was approved long back, but work is not yet commenced as the revenue department is not giving any land for the same. Primary centres at Kodathi, Halanayakanahalli and Mandur are ready, but have not been inaugurated yet. I, in the interest of the public, therefore interfered and opened these centres to public. Primary health centres at Marathahalli and Kannur are ready for operation.

Government’s indifference to give land to hospital

Grants to construct 100 bed hospitals at Siddapura has been approved. Government is delaying in handing over the land from BMTC to Health department.

When I became MLA for the first term, we were successful in regaining more than 270 acres of encroached government land and were reserved for public works. Some of them are:
* Survey number 104 at Gunjur village, where 27.04 acres was reserved to construct international stadium. But State government has not allotted any grants to sports department. Thus, the constituency is deprived of having a stadium of International standard.
Two acres was allotted to construct open theatre and four acres to construct Vemana International conventional centre at Doddakannalli village, but funds are not released from the government.
* When BJP was in government, construction of houses from BDA was started at Gunjur village ; This apart, construction of 500 houses at Kodathi village were taken up under BSY scheme but due to government’s negligence, none of these projects is completed so far.
* At Mahadevapura, many of the storm water drains, government lands and lakes are encroached. We are demanding State government to carry out the survey and clear the encroachment, but the state government is not paying heed to my request.

Eastern airport approach road should have opened for public as a major connecting road of Mahadevapura. As the Government is ignoring it, the work has not started.
No grant is given by either State government or BBMP for construction of railway over bridge and railway under bridge to reduce traffic congestion. Although we have demanded additional vents at Panathur and Doddanekkundi, action is not taken.
It was proposed to construct bus station in the existing market area at Varthur by shifting market to different location. But government has exhibited its sheer irresponsibility by not handing over the land to the said purpose.

Two acres land was sanctioned for construction of government first Grade College. As funds not released, work has not been started. Students have been facing difficulty for the last four years.
Despite repeated pressure to develop playgrounds at Hoody and Varthur, government not showing interest.
Inauguration cancelled: After printing invitation cards for inauguration of Polytechnic at Immadihalli and First Grade College at Varthur, government deliberately cancelled the event. However, we have opened them and made them functional for the benefit of students. Similar is the story with Mandur bus depot. It was not formally inaugurated, but now we opened it for public convenience.

No grants for digital library

A new digital library has been constructed at Thubarahalli, but with no grants from state govt library is not functional.

Social Welfare Department has stopped giving grants to developing colonies for the poor thus depriving thousands of families in availing social justice.
When BJP was in power, apartment complex was constructed by Karnataka State Slum Board and the same was allotted to beneficiaries at Sadaramangala, Varthur and Channasandra. However, at Marathahalli and Soolikunte, though land was handed over to Karnataka Slum Board and building has been constructed, it has not yet been allotted to the needy.

Water supply to villages after many efforts

Out of 110 villages that were added to BBMP in 2007, 31 villages comes under Mahadevapura assembly constituency. In order to get Cauvery water supply to these villages, I met the Union Urban Development Minister along with our MP and got the approval for the same with great difficulty. Kaveri pipeline laying work has just begun. 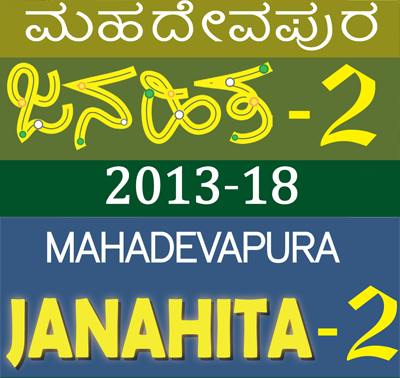 ‘Shri Arvind Limbavali has been working very sincerely for the development of Mahadevapura constituency, which unlike many other Bangalore constituencies has unique challenges of huge size & urban-rural diversity. Mahadevapura has many villages coexisting with the largest of the Multinational corporations.

He worked on a comprehensive development plan for the constituency by establishing Mahadevapura Agenda Task Force to discuss,  analyze, plan & implement development projects in the field of health, education, sports, culture & road infrastructure.  Land allocation for a sports complex, establishment of a digital library,  rural market places, world class roads & footpaths are to name a few of his initiatives. He also organized “Job Melas” to provide employment opportunities to unemployed youth by bringing together employers from various sectors & industries. Given the political flux in the state & changes in government,  his achievements are even more noteworthy & commendable. I wish him all the best.

I have been BJP activist since 1983. I have seen many politicians and leaders. But Arvind Limbavali is one of those important, highly disciplined soldiers who participated in movements and evolved from grass root levels to be successful MLA. When asked to resign from ministry, he did so without hesitation. It reminds me of Sri Rama who followed his father’s words with great respect. His uniqueness lies in the fact that he has been able to identify himself with all the sects of the constituency. He is a model MLA and his working style is example for everybody.

There was confusion after Bangalore east was divided. Mahadevapura is probably the biggest Vidhanasabha constituency in the state with a large population of Vokkaliga and Reddy community. We were worried how new MLA would develop it. But Arvind Limbavali has been developping the constituency by touring nook and corner of Mahadevapura. He makes use of all the resources and schhemes of the Government. Earlier there were politically motivated crimes . But now we can say that such cases do not exist here. He is handling this constituency without ever making us feel that this is a reserved constituency which is appreciable. A cordial relationship has grown among people of all communities and the people in this area have now received the much deserved peace to lead a happy life. If he is the MLA in the coming years, this area will definitely witness maximum progress.

Arvind Limbavali’s working style as MLA of Mahadevapura in the last four years is highly appreciable. The development works, far reaching administrative decisions, his genteel behavior in keeping the harmony among all the sections of the society is admirable. He constantly tours the constituency and offers solution to the problems by suitably responding to the situations. He is ahead of the remaining assembly constituencies. Arvind Limbavali has materialized all the dreams of the people who elected him as MLA by developing one of the most backward constituencies in to a progressive one; he has put painstaking efforts in developing peace and harmony of the constituency.

Now I am 99 years old. I have seen many politicians and ministers all these years. Arvind Limbavali is the rarest of them. He is compassionate, popular and pious. Why should I praise anybody at this age? Let the Almighty bless Arvind for his good deeds.

25 -30 years dream of the muslims of Kadugodi area has come true. For decades nobody responded to the aspirations of muslim people.But our MLA Arvind Limbavali has ably responded to our problems. He has materialized our 30 years dreams, be it Idga ground, place for Urdu school, English medium in high school etc. His pertinacity to complete the work is highly commendable. We, the Muslim community of this area pray for his well being.

Arvind Limbavali is light of our Ashram, as he has laid proper new road to it. He has helped us to build a room for our children through his MLA fund. His love and concern for children is commendable. His generosity, selflessness and his vision for development has made him good public servant. We pray for his growth, so that he can serve the people well.

As an MLA, Arvind Limbavali is doing good work in all areas of the constituency. The people have belief in him and share a very good opinion. He has great interest in Mahadevapura constituency’s developmental works and is honest in his efforts. He is also well behaved. To sum it up, He is a decent politician and an MLA.